MADI portability at its best!

The compact MADIface USB provides MADI I/O over USB 2.0 while supporting the format's full 64 channels for recording and playback, under Mac and Windows. Both inputs can be used for full redundancy operation. Optionally both MADI I/Os can be operated simultaneously for full 128 channel input and output access, mixed and routed by TotalMix. Even without computer the small box delivers extraordinary bi-directional format converter and active repeater functionality.

Its sturdy and bus-powered design makes it as easy to use as reliable in operation. MADIface USB is both MADI portability at its best as also a perfect desktop solution to connect MADI equipment to any Mac and PC. A real gem in flexibility, usefullness and trouble-free operation - as you expect it from RME.

The option Disable TotalMix completely disables TotalMix, the unit's flexible internal mixer and routing matrix. All input and output data is going straight to record/coming from playback, with no mixing or routing involved. In this mode the outputs are mirrored, carrying the same signal.

In 64 Channel Mix mode TotalMix shows 64 input, playback and output channels. All settings in TotalMix use the data from one MADI input port, and send identical data to both MADI output ports. The currently active MADI input port can be configured in the Settings dialog.

The option AutoSelect activates an automatic input selection. Using both inputs at the same time, AutoSelect puts the device into Seamless Redundancy mode. The MADIface USB will switch to the other input in real-time if the current one fails.

In 128 Channel Mix mode record and playback is still limited to 64 channels, with the current input selected in the Settings dialog. But the other input is also available through TotalMix, and the output signal is not mirrored, but separated, with TotalMix having 128 output channels. Applications like independent mix output, monitoring and serial pass-through of the second source are just a few clicks away.

SteadyClock as well as RME's well known MADI compatibility ensure hassle-free operation with other devices. MIDI over MADI technology may be used to remote-control other MADI devices. DIGICheck, an included complete audio analyzing suite, supports the user under Mac OS X and Windows.

Like all the latest RME interfaces, the MADIface USB also includes the powerful digital real-time mixer TotalMix FX. It allows for practically unlimited mixing and routing operations, with all inputs and playback channels simultaneously, to any hardware outputs. The MADIface does not have a DSP, so there are no FX available. Still it includes a dedicated Control Room section with Talkback, Main/Phones, fader groups, mute groups, complete remote controllability via Mackie or OSC protocol, and much more.

Here are some typical applications for TotalMix:


Every single input channel, playback channel and hardware output features a Peak and RMS level meter, calculated in hardware. These level displays are very useful to determine the presence and routing destinations of the audio signals.

For stand-alone operation the MADIface USB can be powered by any USB power wall wart or USB battery, like those for mobile phones and MP3 players. Without a computer host the device enters a pre-configured mode. Using one input the MADIface USB is clock slave, using the sample rate found at the input. AutoSelect is active, so either input can be used. The input's audio data is transferred to the outputs unchanged. The output format follows the input format (56/64 channel mode, 48k/96k Frame). Using two inputs Double Processing Mode becomes active, for two independent paths, including two SteadyClocks. The internal routing changes from parallel output to cross-coupled.

Therefore in stand-alone mode the unit automatically operates as active repeater, effectively doubling the maximum cable length of 100 m coaxial and 2,000 m optical. With two inputs connected the unit works as bi-directional format converter, converting coaxial to optical and vice versa simultaneously. This is even possible when the connected device uses sample rate converters for independent clocking - the sample rate can be different in both paths.

Thanks to a completely newly generated signal, jitter suppression by SteadyClock, and reclocking of the MADI output, the MADIface USB provides not simple but sophisticated format conversion. 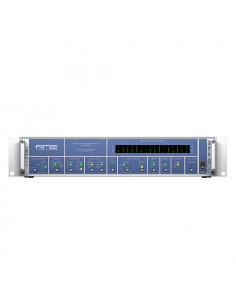 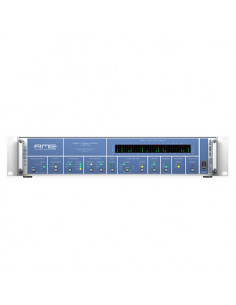 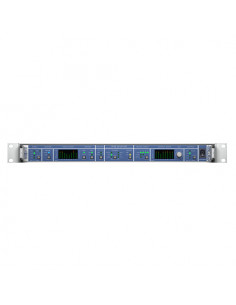 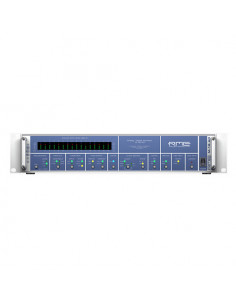 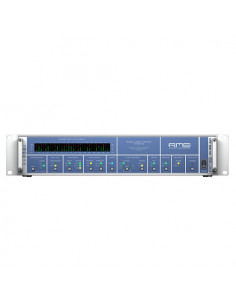